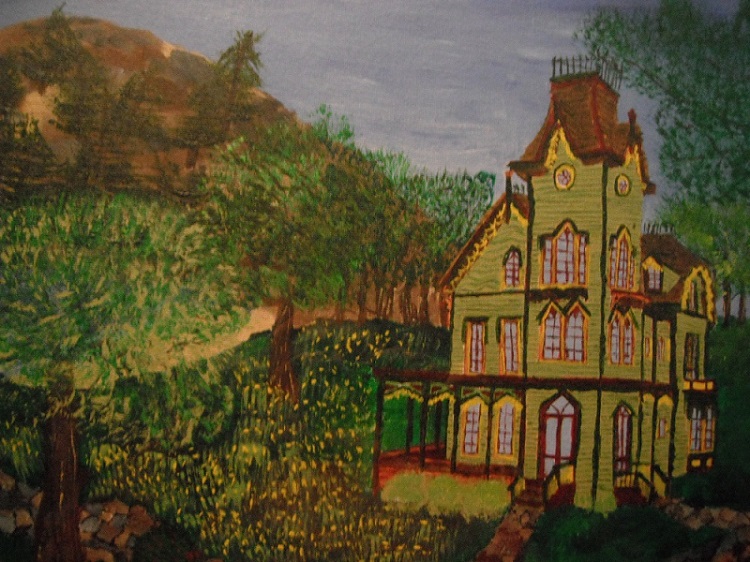 The store is on the first and second floor while Mani's apartment is on the third floor. At the back of the store there's an alcove which opened up to a glassed-in room, with a full view of the countryside. The room was round and extremely high so she could hang dozens of paintings, none of which were the same size. In the distance there's a beautiful cliff and below, the crashing waves of the sea the surrounding acres of land also belong to Mani and was covered with trees. A part would lead to a river and within walking distance was a lake on the other side, the property is lined with the ocean, and the area is always peaceful and quiet. The story room has couches all around the room and the center is filled with cushions. The store also carries a private collection of scroll being restored and transcribed.

The Blue Cauldron, The bed and breakfast

The Blue Cauldron, The layout for the bed and breakfast.

The Blue Cauldron, The layout for the bed and breakfast of the 3rdfloor

The cave where they lived was decorated by Lilay, The entrance to the cave had three doors to prevent the sand from penetrating the cavern and to cut down the wind's power to transport small rocks into their home. The first door was small and to the left, covered by a thick canvas. Then there was a narrow passage leading to a wooden door at the far right. The passage was anciently decorated with the story of Atlanti and one would not walk briskly to the second door, but admire the history of their people. Then, again, a long, narrow hallway lead to the final door, which was in the center and ornamented by beads suspended on a string. The story of Atlanti and his people leaving earth for the stars was depicted there. Down the second flight of stairs was their bedroom. Another flight of stairs led down to the lower level where plants grew and their well was. Above them, at the very top of the wall, a crystal pyramid intensified any light and sent it to the center of the mountain, which allowed the plants to grow.

The port of Os

The map of the port of Os

Amos store with the rest of the port.

The store had a large glass case display along the work shop which was annexed to the actual store and private residence of Amos. The entrance of the store was eclectic decorated with relics, souvenirs, gifts, art of mixed cultures sculptures, tapestry, and paintings. Not an inch of the walls were empty. There was an inner court yard isolated from the street and the kitchen and day room was on the first floor. The bedrooms are on the second floor and there's a terrace on the last floor adjacent to a studio with a view of the 2 street flanking the store. There's a private dock for Amos boat.

The layout of Amos Store in Os.

Amos also owns Isifilmos, an island is situated in the meridional southern part of the globe and his house is surrounded by trees that are used to make Tapas. His home was hidden amongst the trees and had a large fire pit. It was a simple open floor plan with 5 bedrooms arranged in a semi-circle around the open space.

Amos view of his private inlet off his island.

Merdaine's house located in the village of Elne, by a large clearing surrounded by farm building that house the granary and the animals.

The place where Amos brings his Dolphin Osmar team for a Victory lunch.

TEMOS TAVERN, The inside layout.

Alayana house, Old yellow house with 10 rooms, large windows and a round tower, it has a landing covered with book cases. The yard has a small pound and a fire pit. Situated on the end of the main street by a cul-de-sac.

floor plan of the Yellow house once the renovations are completed.

Sasgorg map, this was a sketch I used to help me keep track of the mountains on the planet. 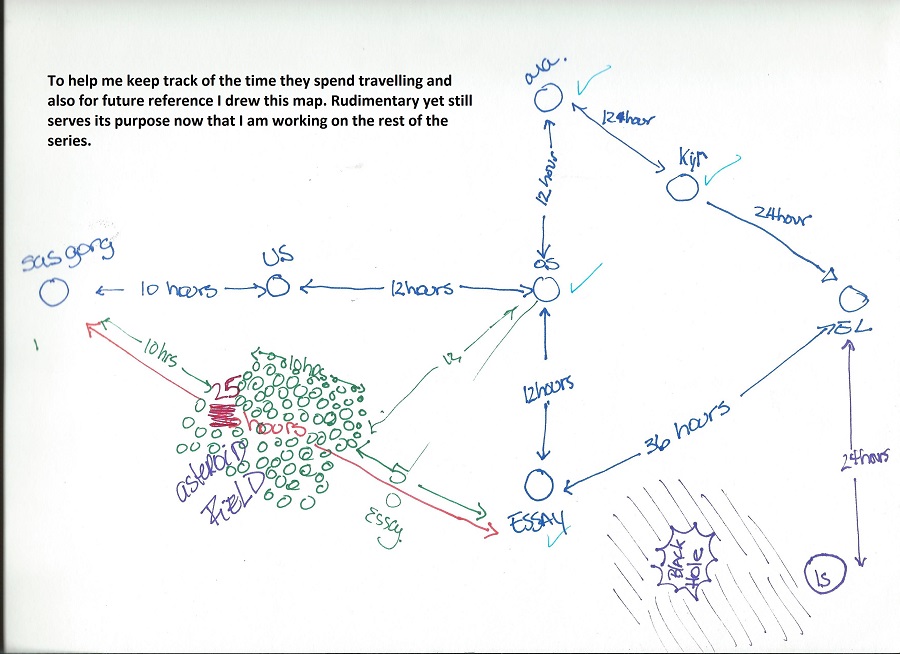 Space Map, was a sketch I used to situate the planets and estimate the travelling time. it's to bad it's not 3D because it's really not linear but it works for now. When I get more time.